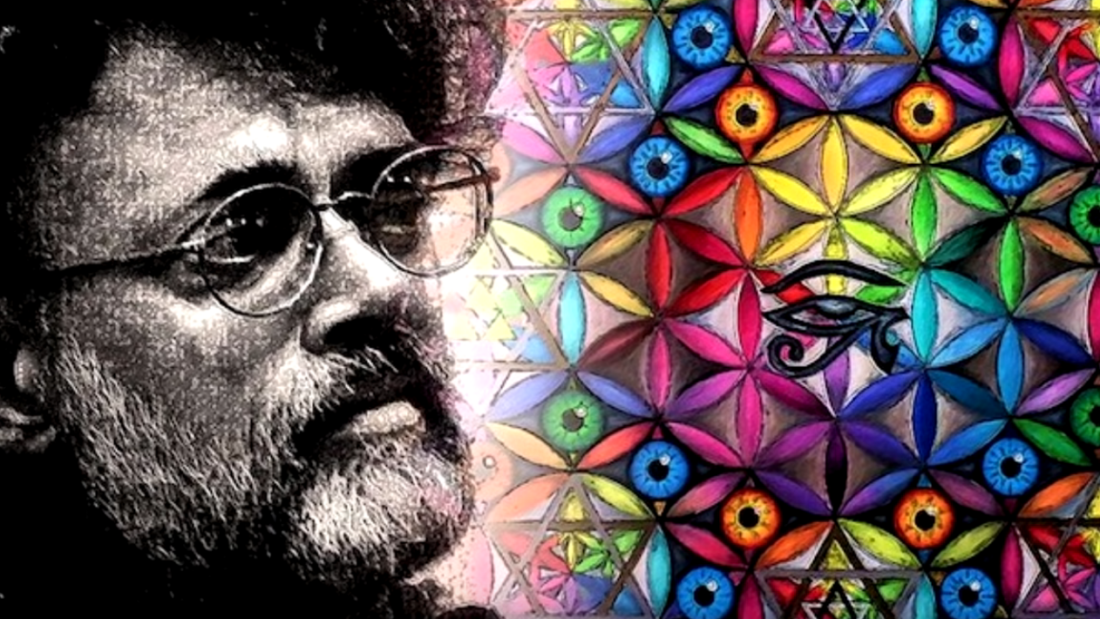 Terence McKenna – Decondition Yourself From the Lie of History

Terence Kemp McKenna (November 16, 1946 – April 3, 2000) was an American ethnobotanist, mystic, psychonaut, lecturer, author, and an advocate for the responsible use of naturally occurring psychedelic plants. He spoke and wrote about a variety of subjects, including psychedelic drugs, plant-based entheogens, shamanism, metaphysics, alchemy, language, philosophy, culture, technology, environmentalism, and the theoretical origins of human consciousness. He was called the “Timothy Leary of the ’90s”,[1][2] “one of the leading authorities on the ontological foundations of shamanism”,[3] and the “intellectual voice of rave culture”.[4]

McKenna formulated a concept about the nature of time based on fractal patterns he claimed to have discovered in the I Ching, which he called novelty theory,[3][5] proposing this predicted the end of time, and a transition of consciousness in the year 2012.[5][6][7][8] His promotion of novelty theory and its connection to the Maya calendar is credited as one of the factors leading to the widespread beliefs about 2012 eschatology.[9] Novelty theory is considered pseudoscience.[10][11]Psychedelics
Terence McKenna advocated the exploration of altered states of mind via the ingestion of naturally occurring psychedelic substances;[5][32][43] for example, and in particular, as facilitated by the ingestion of high doses of psychedelic mushrooms,[26][55] ayahuasca, and DMT,[6] which he believed was the apotheosis of the psychedelic experience. He was less enthralled with synthetic drugs,[6] stating, “I think drugs should come from the natural world and be use-tested by shamanically orientated cultures…one cannot predict the long-term effects of a drug produced in a laboratory.”[3] McKenna always stressed the responsible use of psychedelic plants, saying, “Experimenters should be very careful. One must build up to the experience. These are bizarre dimensions of extraordinary power and beauty. There is no set rule to avoid being overwhelmed, but move carefully, reflect a great deal, and always try to map experiences back onto the history of the race and the philosophical and religious accomplishments of the species. All the compounds are potentially dangerous, and all compounds, at sufficient doses or repeated over time, involve risks. The library is the first place to go when looking into taking a new compound.”[56] He also recommended, and often spoke of taking, what he called “heroic doses”,[32] which he defined as five grams of dried psilocybin mushrooms,[6][57] taken alone, on an empty stomach, in silent darkness, and with eyes closed.[26][27] He believed that when taken this way one could expect a profound visionary experience,[26] believing it is only when “slain” by the power of the mushroom that the message becomes clear.[55]

Although McKenna avoided giving his allegiance to any one interpretation (part of his rejection of monotheism), he was open to the idea of psychedelics as being “trans-dimensional travel”. He proposed that DMT sent one to a “parallel dimension”[8] and that psychedelics literally enabled an individual to encounter “higher dimensional entities”,[58] or what could be ancestors, or spirits of the Earth,[59] saying that if you can trust your own perceptions it appears that you are entering an “ecology of souls”.[60] McKenna also put forward the idea that psychedelics were “doorways into the Gaian mind”,[43][61] suggesting that “the planet has a kind of intelligence, it can actually open a channel of communication with an individual human being” and that the psychedelic plants were the facilitators of this communication.[62][63]

In a more radical version of biophysicist Francis Crick’s hypothesis of directed panspermia, McKenna speculated on the idea that psilocybin mushrooms may be a species of high intelligence,[3] which may have arrived on this planet as spores migrating through space[8][64] and which are attempting to establish a symbiotic relationship with human beings. He postulated that “intelligence, not life, but intelligence may have come here [to Earth] in this spore-bearing life form”. He said, “I think that theory will probably be vindicated. I think in a hundred years if people do biology they will think it quite silly that people once thought that spores could not be blown from one star system to another by cosmic radiation pressure,” and also believed that “few people are in a position to judge its extraterrestrial potential, because few people in the orthodox sciences have ever experienced the full spectrum of psychedelic effects that are unleashed.”[3][7][18]