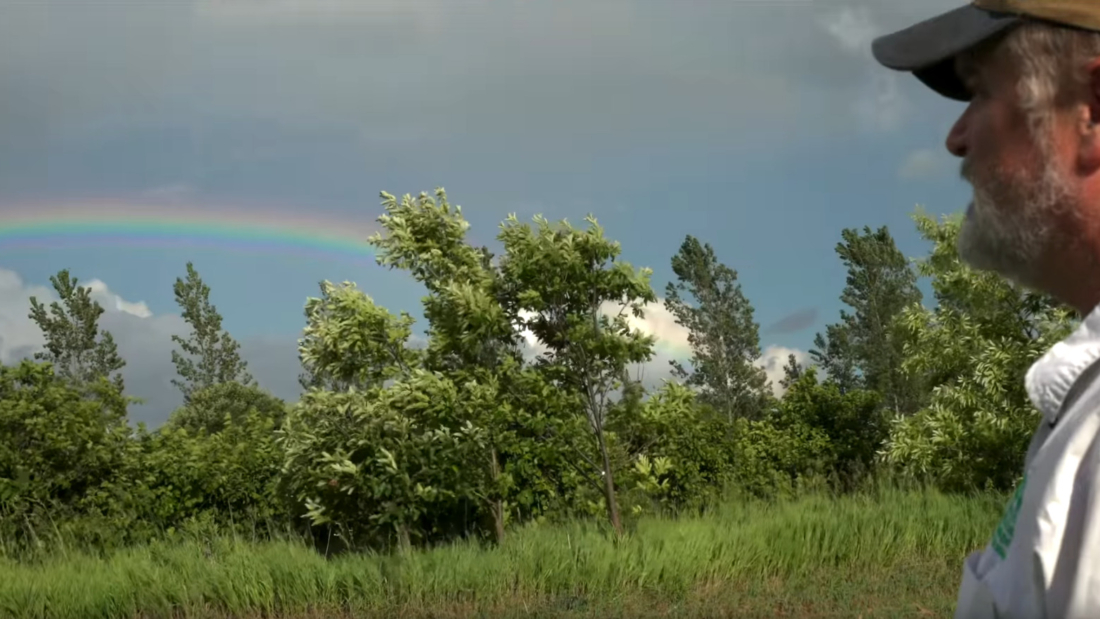 Kirsten Dirksen
In the early 90s, Mark and Jen Shepard bought a degraded corn farm in Viola, Wisconsin, and began to slowly convert it from row-crops back to a native oak savanna that would become one of the most productive perennial farms in the country.
After 8 years of homesteading in Alaska (arriving just as the Homestead Act was expiring) where they had been forced by low-paying jobs to discover “which trees, shrubs, bushes, and vines we could get food from”, they arrived in the Driftless Area of Wisconsin ready to apply their knowledge of permaculture (“permanent agriculture”).
Over the past nearly three decades, Mark has planted an estimated 250,000 trees on the 106-acre farm. The main agroforestry crops are chestnuts, hazelnuts, and apples, followed by walnut, hickory, cherry, and pine (for the nuts). For short-term income, the couple planted annual crops, like grains and asparagus, in alleys between the fruit-and-nut-bearing trees. Cattle, pigs, lambs, turkeys, and chickens act as pest control and free composters as they roam the savannas of the farm.
Not content to rely on commercially-produced seeds, Mark does his own breeding to find the best-adapted trees to his region using the method he’s dubbed STUN (Sheer Total Utter Neglect). He plants trees at a higher density than recommended and with as much diversity as possible (at one point they were farming 219 varieties of apples) and then lets pests and disease run their course. He fells diseased trees or those that don’t bear enough, or early enough, fruit. The result is orchards hardy enough to survive even Chestnut Blight.
As more and more of the alley crops have been replaced with trees and pocket ponds to help manage water on the farm, the land here has returned to the native savannas where the mastodon once grazed 12,000 years ago (in 1898 bones were discovered 5 miles down the road).
New Forest Farm has inspired many other perennial farms, especially chestnut farmers in the region, and Mark hopes that every schoolchild will plant their own apple seeds (and perhaps subject them to STUN) and that every family can plant a backyard food forest.
Mark’s restoring agriculture course: http://bit.ly/TheEcologyOfRestoration…​
New Forest Farm: https://newforestfarm.us/​
Mark’s book “Restoration Agriculture”: http://www.restorationag.com/product/…​
On *faircompanes: https://faircompanies.com/videos/rest…