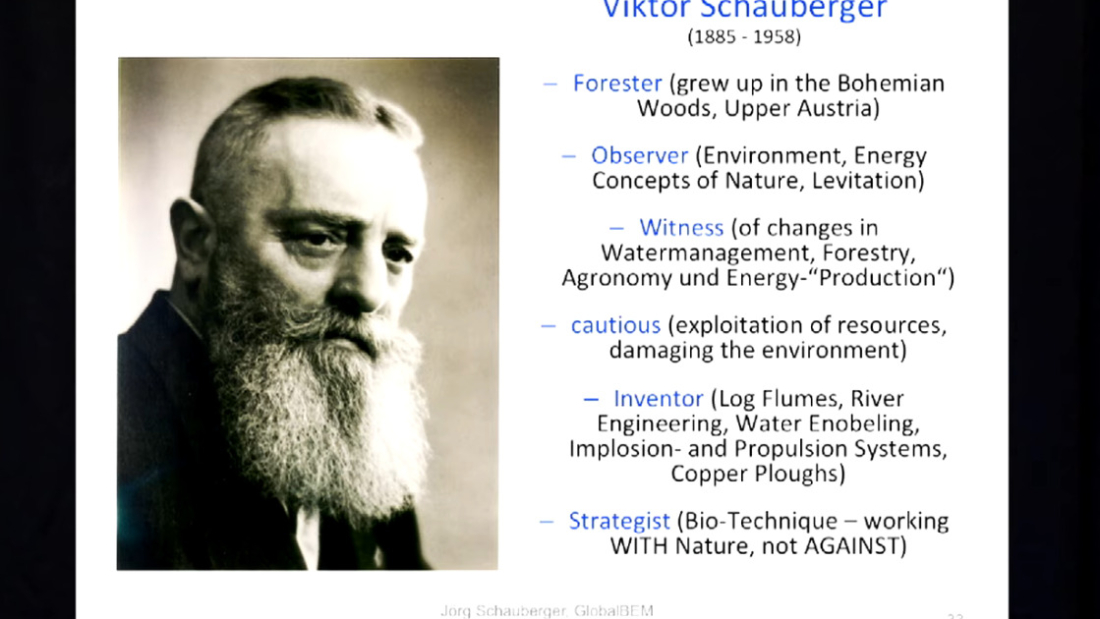 GlobalBEM
ABOUT THE PRESENTER
Jorg Schauberger is holding a science-degree (Magister rer. nat.) in Mathematics from the Karl-Franzens-University in Graz, Austria. With his company Schauberger Natur Technik he is partner in a research group (Applied Water Physics) at Wetsus in Leeuwarden, with a focus on the behavior and the benefits of water, vortexed in hyperbolic cones, that were established by his father Walter Schauberger.
MORE INFO RELATING TO THE PRESENTER
Websites: http://pks.or.at/en/​
Books: http://pks.or.at/en/publications/​
ABOUT THIS PRESENTATION
Viktor Schauberger and his unconventional way of looking at the complex web of life, his predictions and solutions.The Austrian forester, observer and inventor Viktor Schauberger (1885 – 1958) was far ahead of his time. From the late 1920ies on he predicted climate change, flooding and droughts, desertification, shortage of drinking water and many other ecological catastrophes – caused by us humans. Schauberger unsuccessfully warned his contemporaries. Nevertheless, he thought of solutions how to co-operate with nature, always having in mind the future of generations to come. He promoted alternative methods in agriculture avoiding chemical fertilizers, developed water-friendly concepts in river-engineering and designed energy-machines, running only on water. His goal was to find a way not to destroy the source, rather than to ennoble it, e.g. water. Whenever used in machines, the resources should leave the engine in a better quality than they had before filling. His energy-concepts also dealt with the possibility of transmuting elements, the creation of “bio-logical vacuums” and other futuristic technologies in accordance with nature.
ABOUT GLOBALBEM:
GlobalBEM, the Breakthrough Energy Movement is an independent organization with the primary goal to facilitate the widespread awareness and use of Breakthrough Energy technology and its implications.
What began as a small group quickly evolved into a wide international network of people from diverse backgrounds including scientists, researchers, academics, artists, and business holders. While the core team is based in the Netherlands, the network spans our entire globe.
For more info, visit our website: https://globalbem.com/​
KEYWORDS
free energy, source energy, magnetic motor, nikola tesla, zero point energy explained, zero point energy, ZPE, vacuum energy, orgone energy, magnetic energy, browns gas, plasma energy, cold fusion, low energy nuclear reaction, lenr, open source system, aether energy, anti gravity, casimir effect, vortex energy, overunity, overunity device, quantum physics explained.
DISCLAIMER
We are all, in a sense, investigators of our world. And while we, as individuals or as GlobalBEM, may not agree with everything presented on this video, we fully support freedom of thought and speech as well as the Quest for truth. We are a non-profit organization of volunteers and thus each member or any other person involved in any way, has to take responsibility for their own statements, acts and beliefs.